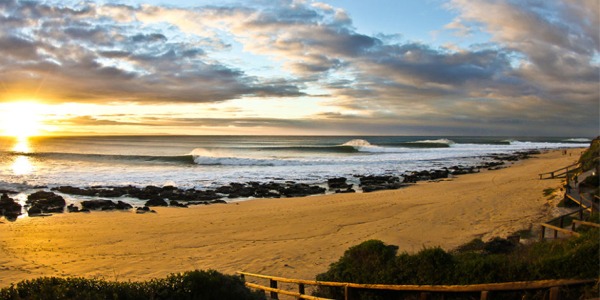 South Africa’s premier wave! A stiff paddle out awaits the unsuspecting surfer. Rather wait and watch how the locals do it. Timing here is everything. You can get into the line up without even getting your hair wet but get it wrong and you will get hammered. Once in the line up, pause and check out the situation. Supers is the most localized spot in South Africa. The locals tolerate no nonsense! Due to the crowds that flock to the break each year, local surfers have organized themselves to deal with the “invasion”. However, if you wait your turn and show respect you will end up getting waves. It might take a few sessions but once your face is recognized and you earn a reputation for being respectful, you won’t have any problems. The wave is best in the 4 – 8 ft category. On the better days the wave breaks from the top of the point and winds all the way along the reef, past the car park to an awesome barrel section. Then its kick out time before the wave closes out at Impossibles. A SW wind is best. Due to the sand dunes, the break is protected no matter how hard the SW blows. NW is cross shore and often blows in the early morning. It creates a bump that can make things unpleasant, especially on critical take off’s. East and SE winds destroy everything but are most predominant in the summer months. A South wind can still be fun as it causes “crumbly” sections that can be bashed. The Billabong Pro surf contest is held each July at Supertubes.

Further down the point 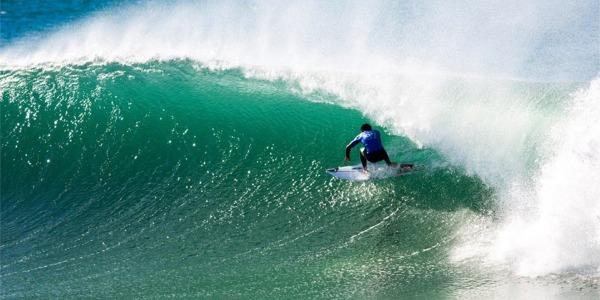 Further down the point, one comes across a fun barrely wave aptly called Tubes. It a short and sometimes intense ride but loads of fun. On the bigger days there is a strong rip and the wave is best in the 4 – 5 ft category. Offshore on a SW wind, it also likes a S or SW swell direction. There is relatively small take off section, which means Tubes cannot hold a large crowd. Home to the elder crew (and some youngsters) of J Bay surfers. 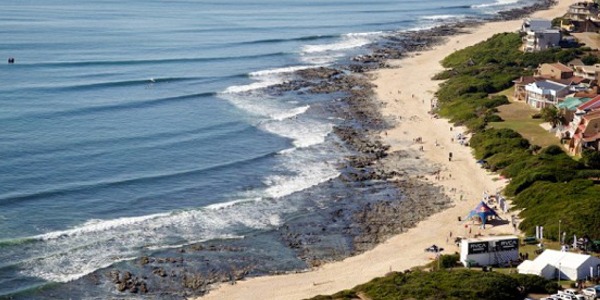 The first wave to be surfed in Jeffreys Bay. Point was discovered by long boarders in the early 1960’s, little knowing they had stumbled across one of the natural wonders of the world. Not as protected as the other waves on strong SW day’s, Point does handle a large swell. The bowl offers some heavy take-off’s but after that the wave mellows out and becomes a bottom turn, cut back combination wave. On a really good day, barrels can be found here as well. A low tide means waves breaking right on the ledge and you can get fun waves here when it is too small to surf anywhere else. A South wind can also be fun as Point offers sections that can be truly blasted. Point is the breeding ground of the J’bay grommets. The pecking order in J’bay is strictly enforced. The groms are only allowed at Tubes and then at Supers once they have paid their dues. However, they are well looked after by the elder surfers who make sure the youngsters get their waves, no matter how crowded the surf gets. This wave is the perfect place to start your J’Bay surf trip. If you want to settle down and get used to the power and vibe of the town paddle out here. There is a gully in front of the car park but again your timing must be right. There is a long “danger zone” that has to be negotiated before you reach the safety of the back line, especially on the big days. Point is best in the 3-8 ft range, depending on what size waves you are comfortable with.

One of the uncrowdwd breaks 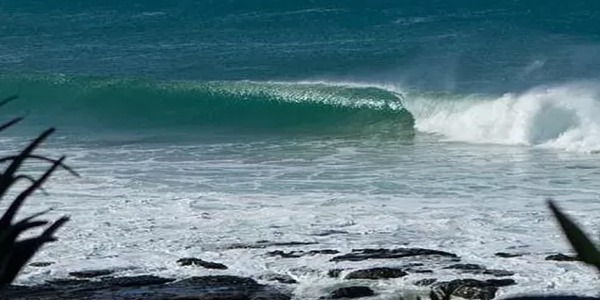 One of the uncrowded breaks in J’Bay. Slightly out of town, the wave works best on a NW wind and a low tide. Can get epic but usually better somewhere else. It needs the right combination of wind, tide and swell direction to get it good. No local crew as yet. 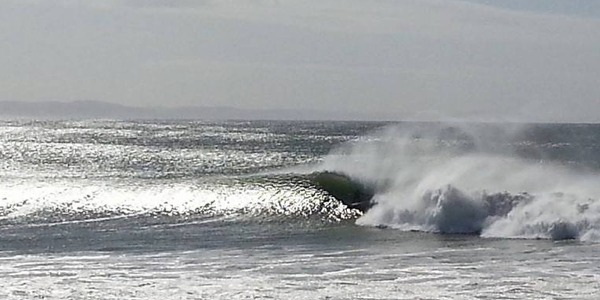 The top section of Supers. Breaks both left and right. Works best on a NW – blowing lightly. The wave has earned its name because it really breaks in shallow water. Locals who have grown tired of the crowds at Supers have ended up surfing Boneyards. So if you get asked to move down to Supers, it’s probably better to go. It is rumoured that the JBU, a local crew of surfers, have claimed Boneyards as their sanctuary.

Probably heaviest wave in the bay 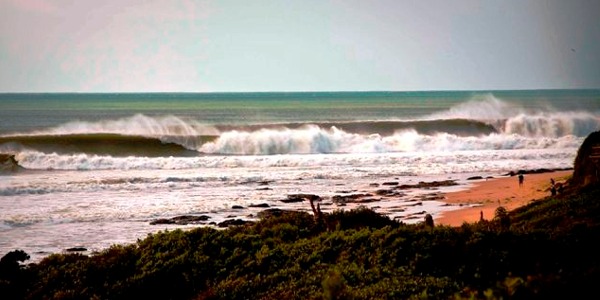 Probably the heaviest wave in J’Bay. It’s gnarly, unpredictable and sometimes just plain nasty! Best at 3-5ft and needs a NW. The SW is cross shore and the break is quite exposed. Likes a high tide, otherwise it tends to throw big close out sections. 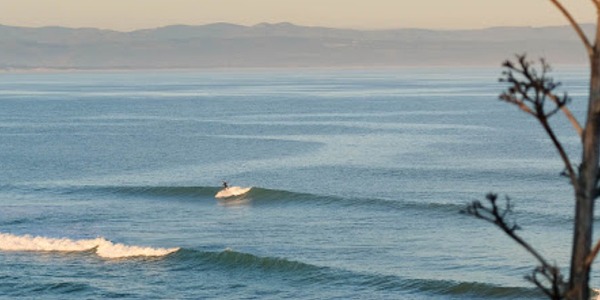 Situated on Main Beach, Kitchens is a mellow reef break that is an underrated wave. A light SW wind is best on a mid tide. As soon as the wind picks up, the spray starts feeling like buck shot. Kitchens is the home break for kids from Pellsrus, a poor community on the edge of J’Bay. Surfing is giving these kids an opportunity in life. 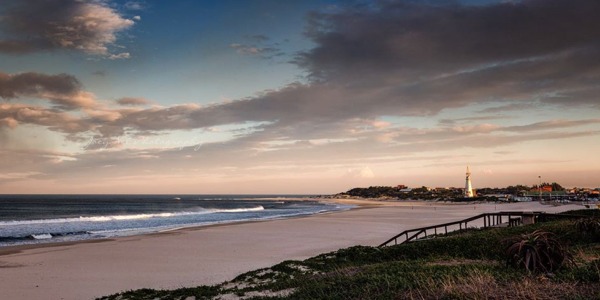 A beach break that generally closes out. But if you are in town go check out the local Surf Schools, who are getting the next generation of locals into the ocean.

No Surf Day, No Problem, Day Tours visit the Addo Elephant Park or several other game parks and attractions.

Getting to J Bay

Inside Scoop on all the local surf spots.

Budget to luxury surf packages to cater for every lifestyle and budget.

A thousand miles from land a storm starts brewing in the great Southern Ocean in between the untamed continent of Africa to the north and the unexplored wilderness of Antarctica to the south. The wind blows across the vast expanse of water and the surface becomes a cauldron of white horses. Eventually order appears out of the chaos. Long lines start marching across the sea to Africa.

The southern tip of Africa awaits the arrival of the swells. One place in particular is ideally positioned to ensure the swell will form the perfect wave. Jeffreys Bay: where dreams become reality! Known since the 1960’s as one of the best waves on the planet, not much has changed since surfers first discovered the point that creates rides of up to 800 m in length. The town has grown, the sand dunes have been flattened but each year the swell still arrives and is eagerly anticipated by local surfers who have dedicated their lives to riding the perfect wave. Surfers from all nations around the world who make the pilgrimage to the Mecca of surfing join them at one of the many surf breaks that give J’Bay the reputation it entirely deserves.

What can the travelling surfer expect when he or she gets to town? When is the best time of the year to score waves? Read on, and make your dream a reality.

Wave season in Jeffreys Bay is from June to August. However, the swell that comes out of the South or South West starts reaching the coast from as early as April each year and many times the season has run until the end of September. The prime time is crowded. Included in the schedule is the JBay Pro, a World Championship Tour event that closes off Supertubes for 10 days in July each year in conjunction with the J Bay Winterfest. It is however, an awesome experience to watch the top surfers in the world pit their skills against each other in one of the best waves in the world.

The best way to reach the town is to fly to Johannesburg or Cape Town and then catch a connecting flight to Port Elizabeth. Arrange for a airport surf shuttle pick up with JBay Cabs from Port Elizabeth and an hour after arrival you could be in styling accommodation and waiting in hungry anticipation for the waves to arrive.

In winter one can still surf with a 3mm wetsuit. Compared to prices elsewhere, if you are getting cold, you could purchase a top quality 4mm wetsuit for a steal. A hood is a bonus on the days when the South West wind is howling and booties can prevent your feet from being lacerated on the razor sharp rocks.

The wave size ranges from 2-3 ft up to 10 ft (Hawaiian size). Bring your boards or order them on arrival. The more organized travellers can even order boards that will be waiting for them on arrival! You need at least two boards in J’Bay. A 6”0’ – 6”6’ for the smaller fun days and then a 6”10 – 7”6’ for the more serious stuff.

All accessories are available in the town from the J Bay Surf Village, So don’t worry about leashes, wax, ding repairs etc. because all that can be taken care of in a town that genuinely caters for surfers.

Now that you are ready to surf, what breaks are there to surf? Here is the inside info on each surf break in town, Surf Spots Jeffreys Bay. Enjoy; just remember that you will meet many hospitable and friendly people but respect the local surfers. They can make your trip a memorable one and you could even make life long friends but if you are disrespectful it is almost guaranteed you won’t be getting many waves!